STAR*TOONZ ~ WHY IT REALLY EXISTS!

Award-winning animator, Tony White, created STAR*TOONZ. Not many people will associate Tony as having anything to do with astrology. He is known primarily for his books, his respected teaching of animation and his 4 decades of award-winning, traditional 2D animation work - including over 200 TV commercials, 2 TV Specials, several short films and the title sequence for ‘The Pink Panther Strikes Again’ movie. He also won a British Academy Award for his breakthrough animated short film, 'HOKUSAI ~ An Animated Sketchbook'.

Tony wrote, designed, animated & directed 'The Pink Panther Strikes Again' titles while working at the Richard Williams Studio in London.
Few knew that Tony was taught about serious astrology, way back in his early career years, by an amazing Irish herbalist/astrologer, Samuel H. Weir. Samuel Weir had effectively saved Tony’s mother’s life at the time. (i.e. When all conventional doctors and hospitals had effectively given up on her!) He did so specifically by diagnosing and treating her with his knowledge of medicinal herbs and medical astrology, based on nothing but the time, date and place of her birth! A fuller account of this amazing event is recorded elsewhere. Suffice to say though, Tony was so amazed by this apparent 'miracle cure' that he asked Samuel Weir if he would teach him how to do astrology. The herbalist cryptically asked Tony ‘why’ he wanted to study astrology. Tony replied that he wanted to learn it because he believed its correct use could be valuable in transforming lives - as it had his mother's and his own when his astrological Birth Chart was first explained to him by Mr. Weir. Samuel Weir fortunately thought this a valid reason. So he agreed to teach Tony how to understand astrology - yet with absolutely no need of recognition or payment! 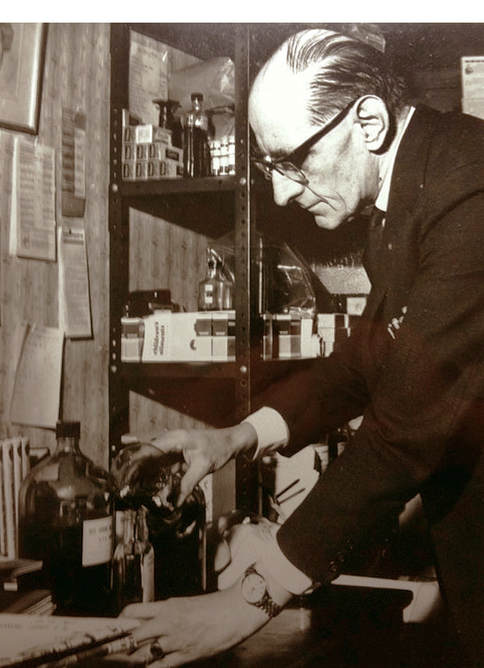 The late, great herbalist/astrologer, Samuel H. Weir. A man who produced miracles, lived in poverty, yet never sought payment or recognition for anything he did!
Even then, most people would not know of Tony’s knowledge of astrology throughout his career years. He effectively kept the knowledge to himself, except for with a few trusted colleagues. There was too much chance of being thought a 'flake' back then, as with now! (Not surprising really, with regards the kind of mind-numbing nonsense that is peddled in the popular media with regards this once elevated and noble art!) Neither did Tony live his life by 'the stars’. Too many people showed a blind addiction to wanting to know what the stars were doing in their lives each and every day - and some could not even get our of bed until they knew that! Tony on the other hand was not one of those people. Indeed, he rarely checked the planetary positions, except when a major incident, event or challenge happened in his life that could not be dealt with by 'normal' means. At such a point – and having seriously exhausted all conventional knowledge first – he would ultimately check-up what was going on in the heavens at the time. He was rarely disappointed! After all, Mr. Weir had not taught him astrology to be an 'astrologer', but simply with the philosophy that 'in times of peace we should prepare for war' - in terms of our life events at least.

The 'GET TOONED!' version of Tony's astrological Birth Chart, featuring his own creations... the 'Supastars'!
It is only now, in his autumn years, that Tony has chosen to reveal his knowledge of astrology and 'come out of the closet' in terms of his support and respect for the higher aspects of this ancient art. Yet his motives are quite honorable, and still animation focused, if nothing else. Throughout his life transformative early experiences with Samuel H. Weir, Tony became aware of the life and work of the fine 17th century herbalist/astrologer, Nicholas Culpeper. Nicholas Culpeper was centuries ahead of his time in terms of synchronicity, midwifery and a holistic approach to healing. And so advanced - and even rebelliously provocative - was he in his own time that the mainstream medical profession, as well as the ruling, privileged class at the time, had effectively caused Culpeper’s great name to be both sullied and effectively written out of history entirely. However, just enough records of Culpeper's life still exist for us to know about his amazing work. Indeed, his tour de force, his great ‘Culpeper's Herbal’ – a book he published for the poor at the time, much to the consternation of the doctors who were getting fat and rich from their protective practices - is still popularly in print today, centuries later! As a result of all this, Tony’s one last remaining career wish is to make a full-length animated movie about the life, work and wisdom of Nicholas Culpeper - entitled 'CULPEPER ~ A Man of Heaven and Earth' - using his own personal experiences with the late Samuel H. Weir to fill in the gaps that are missing from Culpeper's day-to-day professional life. 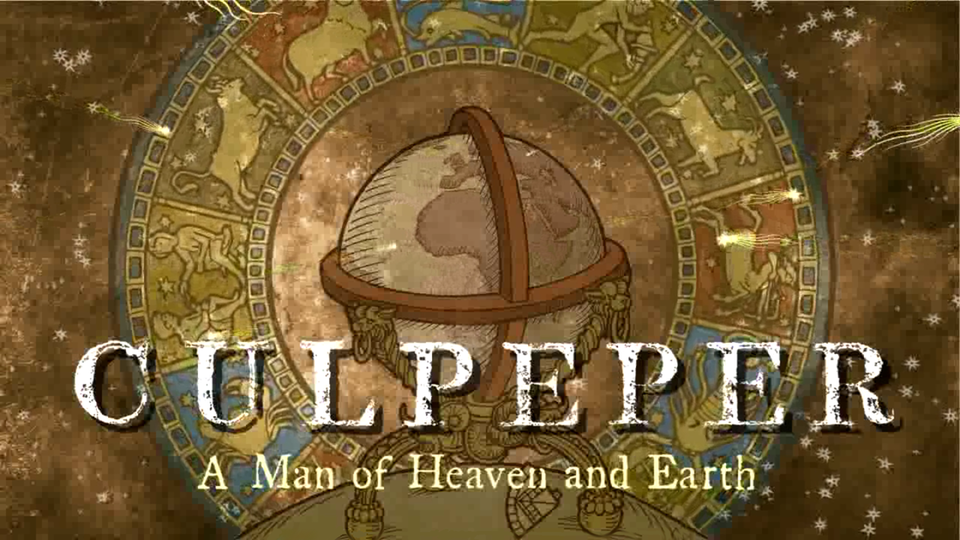 The opening title sequence of Tony's proposed pilot film of the full-length 'Culpeper' movie he hopes to make in traditional hand-drawn 2D animation.
Having been effectively forced to retire from an animation industry that no longer exists in the USA, as a result of the digital revolution, Tony is now unable to raise the necessary funding to make his Culpeper film. So at this time in his life when it doesn’t matter so much what the world thinks of you, Tony has decided to publicly channel all his animation and artistic skills into bringing a greater prominence to the astrological principles that he has witnessed as being extremely valuable to him throughout his life. Yet at the same time, it is Tony's secondary wish is to have a little innocent fun with the truth of the subject too – hence the arrival of STAR*TOONZ and his ‘Supastar’ characters that are featured throughout the site. Tony is hoping that in this way more people might find enjoyment from learning what astrology has to teach - with any money generated from it all being re-channeled into the creation of the Culpeper pilot film. Doubly inspired recently by the wonderful BBC drama series, ‘Wolf Hall’ - which is set in the same time and place in history where Culpeper was - Tony not only wishes to make his Culpeper film factually respectful, but also wants to make it groundbreaking in traditional 2D animation terms too. To do this, he wants to bring alive, through hand-drawn animation, the wood engravings from this period, among other things. 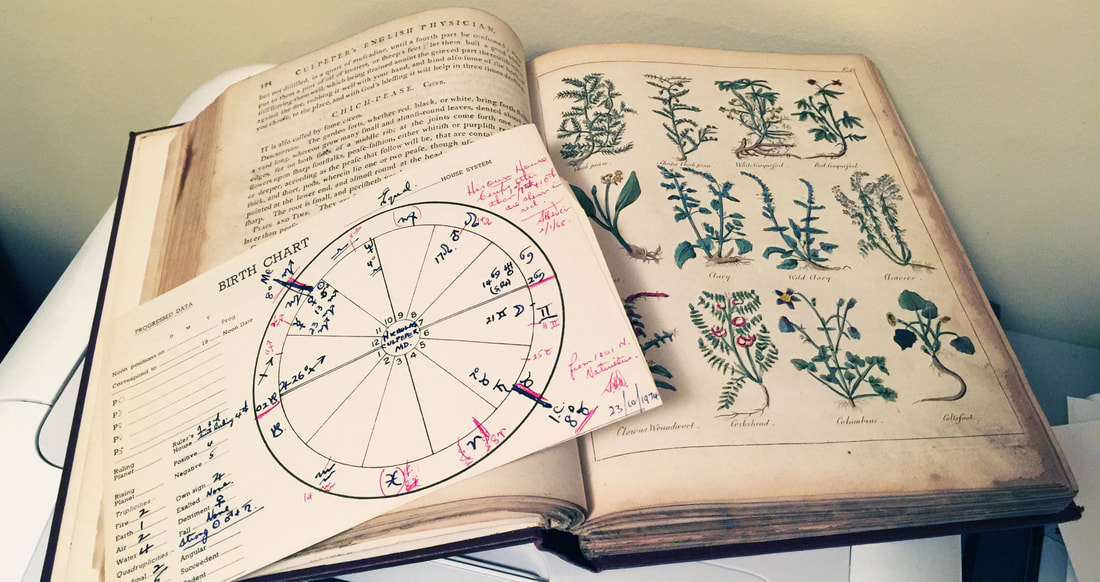 Prized possessions! A 2nd-edition copy of Culpeper's famous 'Herbal', plus a hand-crafted Birth Chart of the great herbalist/astrologer -  both presented to Tony by the late Samuel H. Weir!
For the record, this website text is written in the early hours of a Seattle morning, on January 31, 2018. The author, being unable to sleep, is being more than made aware that currently in the heavens there is a ‘Super Blue Blood Moon eclipse’ occurring! It is normal to have a full moon every month but when it occurs a second time in the month it is known as a ‘Blue’ moon. Added to this is the fact that moon is at its closest orbit point to the earth, known as a ‘Super’ moon when full, and therefore is 14% larger to the human eye. On top of all this it is also experiencing a total eclipse in the sky, making it blood red in color! This clearly is a symbolically significant event, suggesting astrologically that it is a moment of great change. (I.e. The end of one long cycle and the beginning of another.) It seemed propitious therefore to transmute this lack of sleep at a particularly momentous point in time to formally announce the true inspiration and purpose behind this STAR*TOONZ website!

The 'Super Blue Blood Moon eclipse', fully exact and active when this page text was written!
In conclusion, Tony sincerely thanks you for supporting this site in any way you can - and that his humble efforts will ultimately lead to the creation of a film that will not only bring honor to the name of Nicholas Culpeper, but will also pay tribute to the late, great herbalist/astrologer, Samuel H. Weir, who once opened Tony’s eyes to a great Truth and saved his mother’s life in the process!
"A physician without astrology is like a lamp without oil!"
~ Nicholas Culpeper
STAR*TOONZ:   KNOW YOUR SELF  ~  KNOW YOUR LIFE  ~  KNOW YOUR WORLD